Today August 17 2020 I finally received notification from the dreaded CA DMV that my CAKE KALK& is LEGALLY REGISTERED in California! OMG after an incredible amount of hassle I got the letter verifying it is so! Sofia will not have to be returned to her former husband, but can instead stay with me. I’m much more handsome and a way better lover anyway!!!!!

And he took shitty pictures of her too. Now she’s happy. 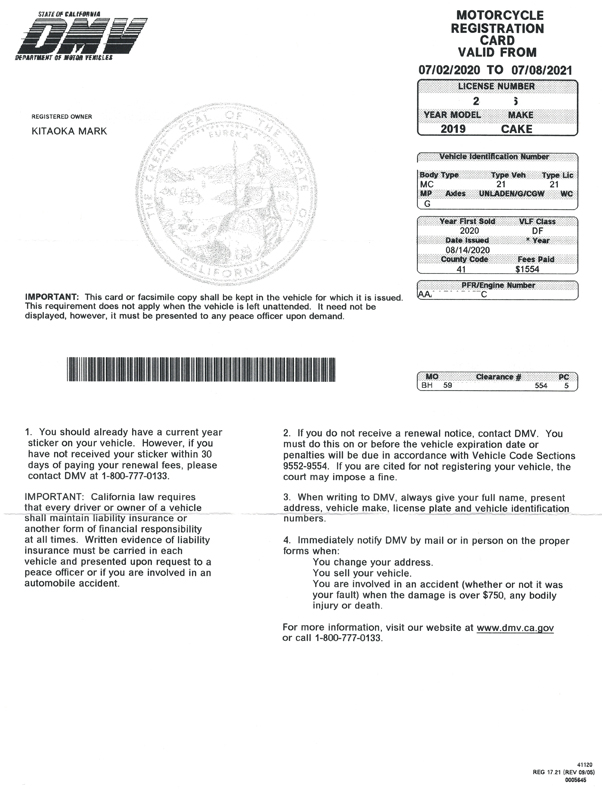 I have documented the procedure to obtain your CA license plate and registration sticker here so you don’t have to go through hell.

7-24-20 The CA DMV sent me this notification on the very same day I received my license plate: 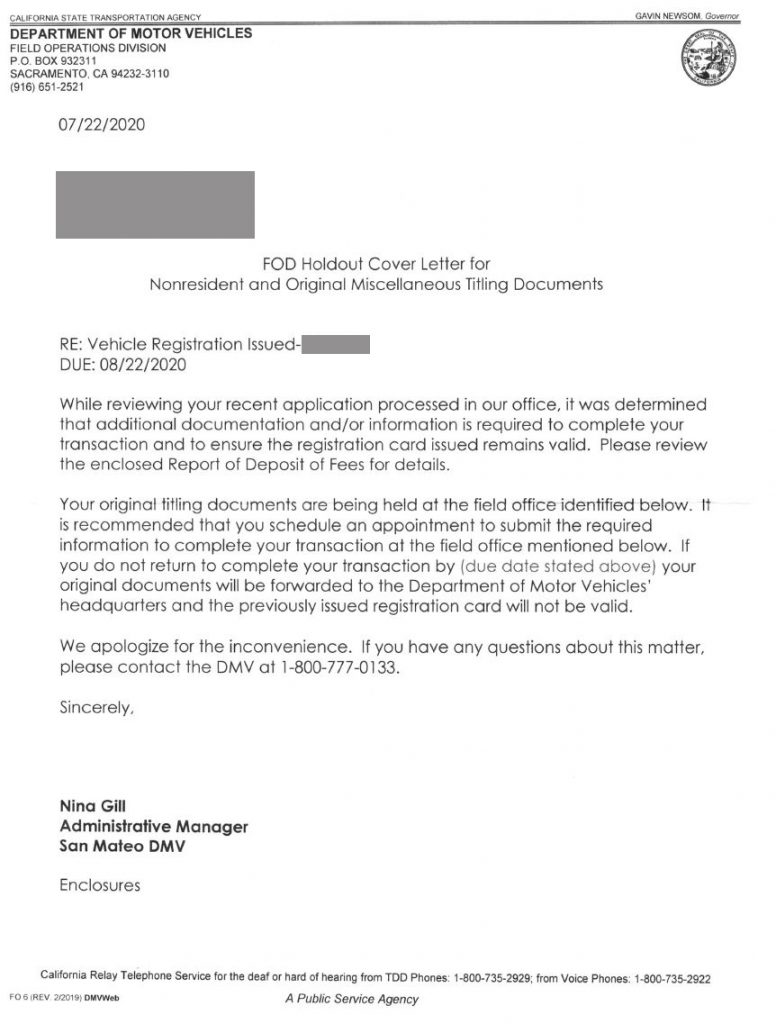 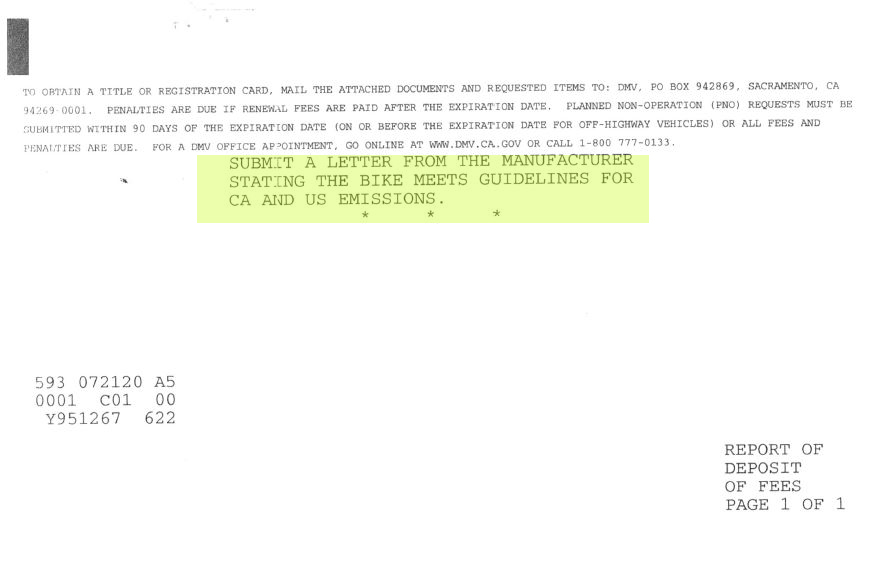 Even though the bike is COMPLETELY EFFING ELECTRIC, the great state of California wanted to know where the EPA sticker was on the bike. Long story short the CA DMV is the most restrictive in the USA for documentation on a new EV. I’m not quite certain if I’m the first person who has purchased a Kalk& in CA. Evolution Motorcycles in Santa Clara CA is a Cake dealer, but I purchased mine directly through Cake. They are working with me to provide a letter stating that the bike meets the guidelines for CA and US emissions. For me personally not being able to obtain verification would mean I’d sell the Kalk& and look at another brand or upcoming brand of dual sport EV. Yeah that would suck, but why own a ‘dual sport’ EV that I cannot use legally on the road? It would be better to upgrade my Sur Ron with the hot rod ASI controller and battery. But even then the bike would not be legal on the road. Fingers crossed that the documentation comes through and the CA DMV is satisfied. Cake really needs to prepare for this when selling the bike online directly to consumers in CA. Why? It’s a total hassle.

As I was writing this section the FedEx delivery person left this at my door from Willie the president of Cake North America! 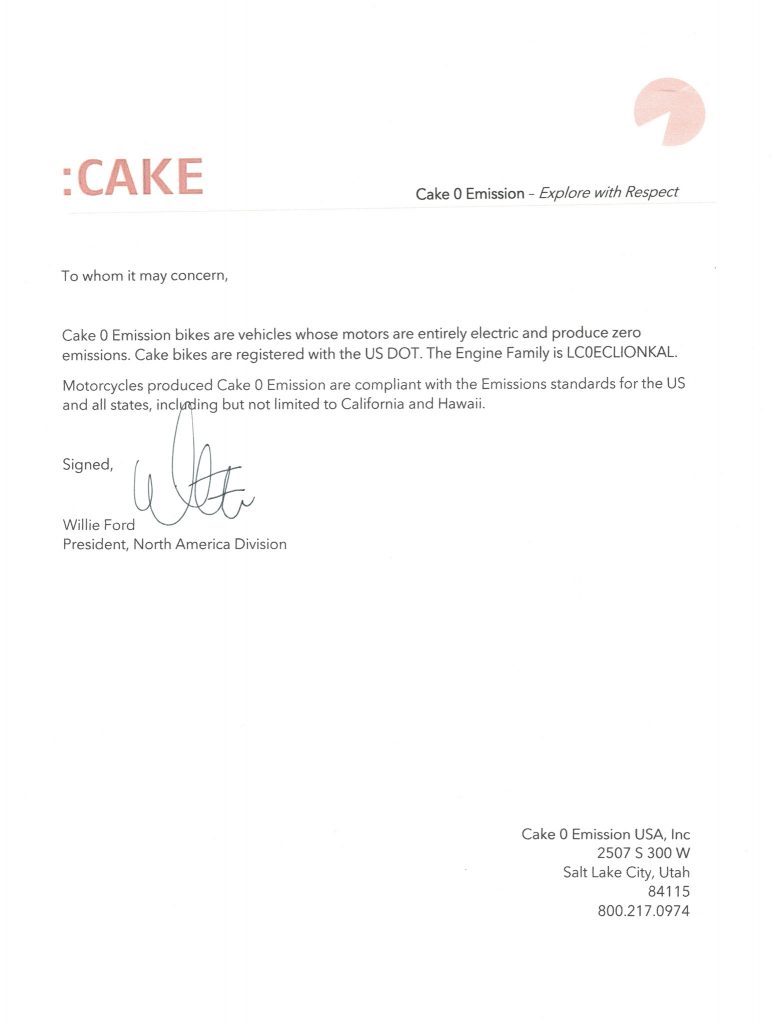 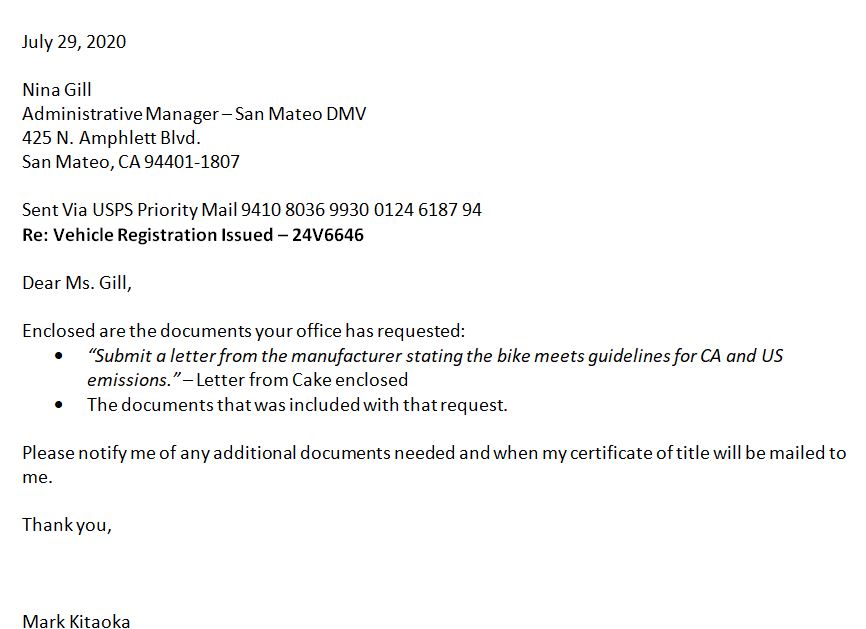 So I will wait another week and if I hear nothing I will write to Nina Gill AGAIN asking for a status.

My Nightmare at the CA DMV

I pay for AAA Membership for two reasons . First and foremost so I never have to go to the DMV and the other is for roadside assistance. For a new vehicle plate and first time registration those MUST BE DONE AT THE DMV.

On January 1, 2019 the state of California passed AB-516 making it illegal to operate a motor vehicle without a license plate. So to comply with the law I drove my car to the DMV office with the paperwork supplied to me by Cake along with my prefilled DMV forms. When I arrived in line outside of the door the greeter asked me what I was doing there and if I had a reservation. I told her I did not since the DMV website alerted me that reservations were not being taken. 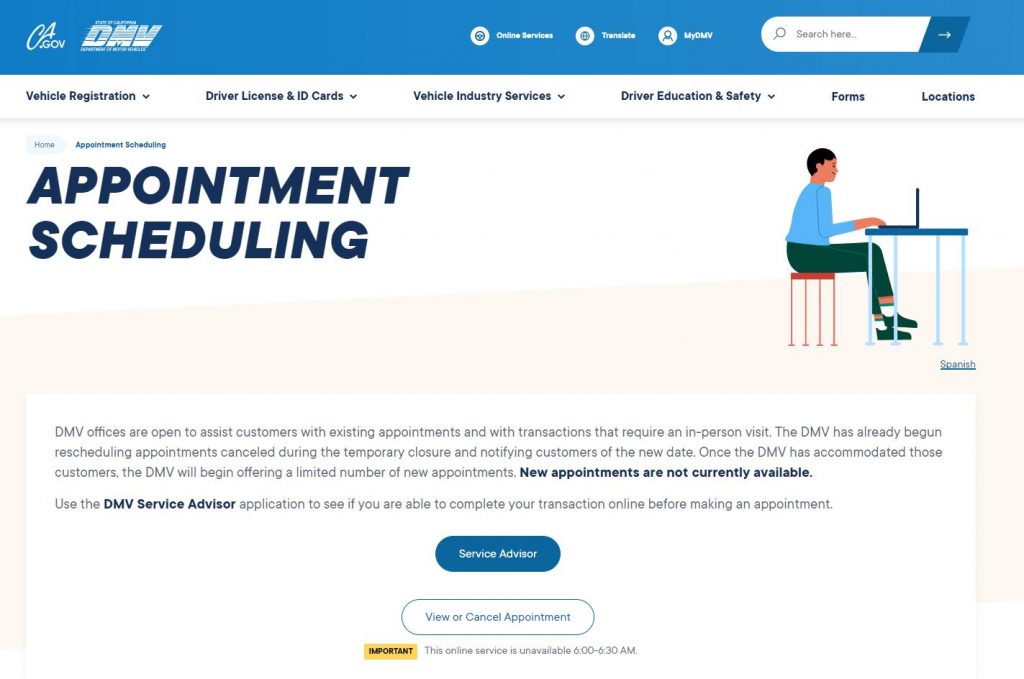 At that point she told me that to register a new vehicle purchased from a dealer I could do that online. I told her that the site said I could not and had to visit the DMV: (strike number two…) 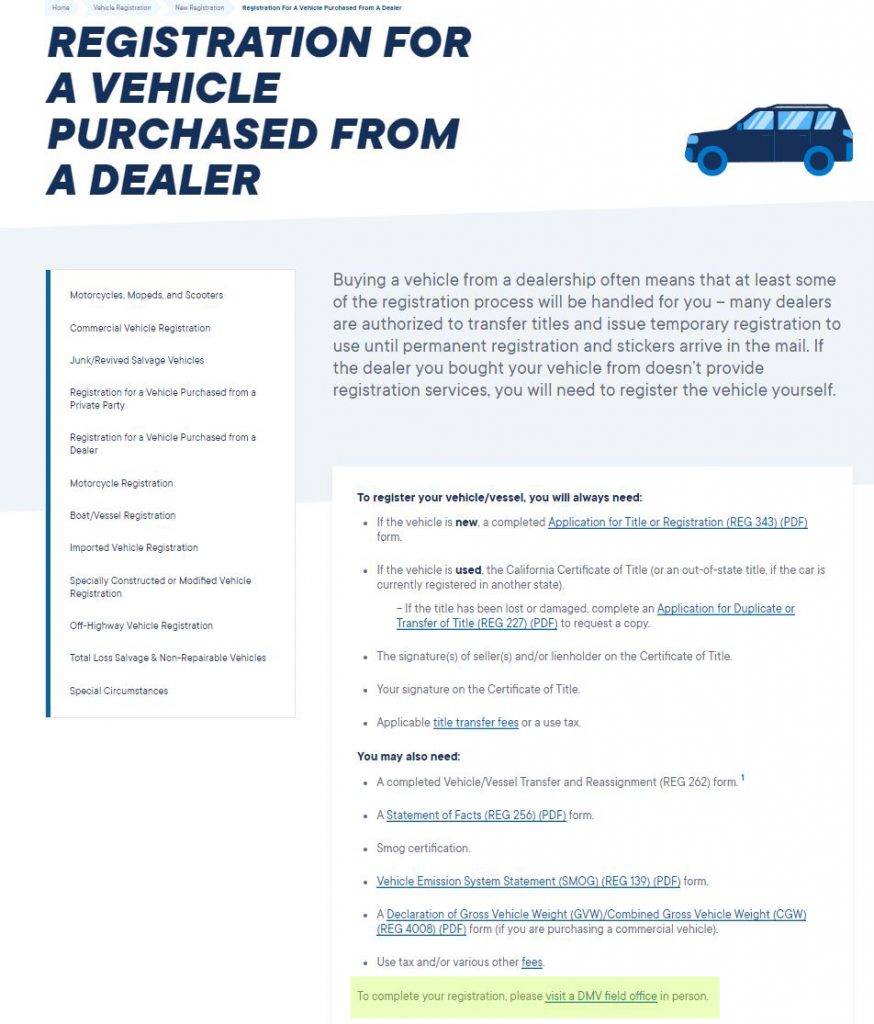 She then went to another woman at the table near the entrance and asked her if I was correct. She came back and said “OK here is your number B012. Go in, find a seat and wait until your number is called.”

B012 was called and I presented my driver’s license and all the necessary paperwork I had prepared in advance. She informed me that their credit card service was down and they were only accepting cash or checks that day. I brought my checkbook for this exact scenario. Once I paid the sales tax and registration fee they asked to inspect my bike and I told them it was illegal to ride it there without a license plate. The woman sighed and told me to go sit down and she would have a temporary plate created for me to use when I brought the bike back for VIN verification. After 30 minutes I was given a temporary plate and was told to return to the DMV to have my VIN number physically verified.

Here are the instructions printed on the back of my Temporary Operating Permit: 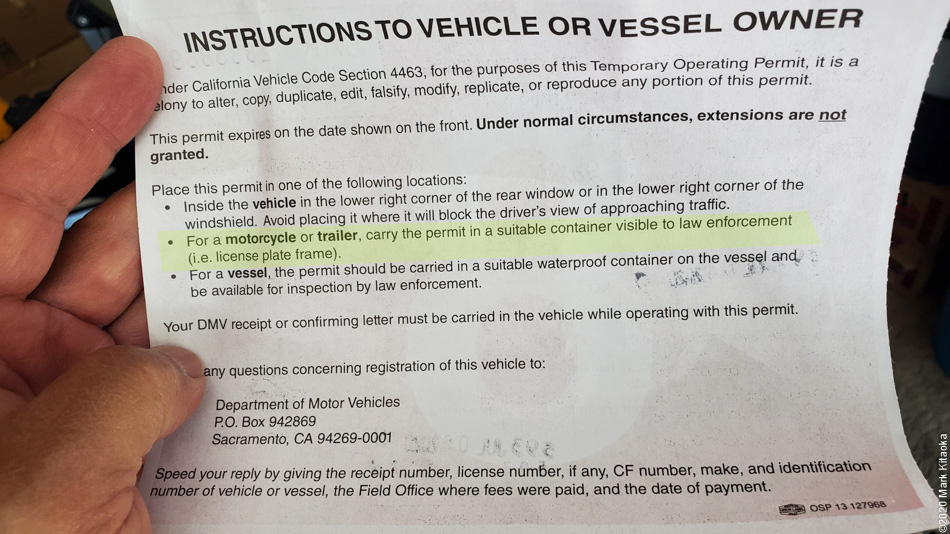 Really? (i.e. license plate frame). Imagine taking two squares of toilet paper, folding them in half along the perforation and somehow placing those into a license plate frame. Then bolting it onto your vehicle and going 35 MPH. Fucking idiocracy at its absolute finest.

My solution. Waterproof and windproof. 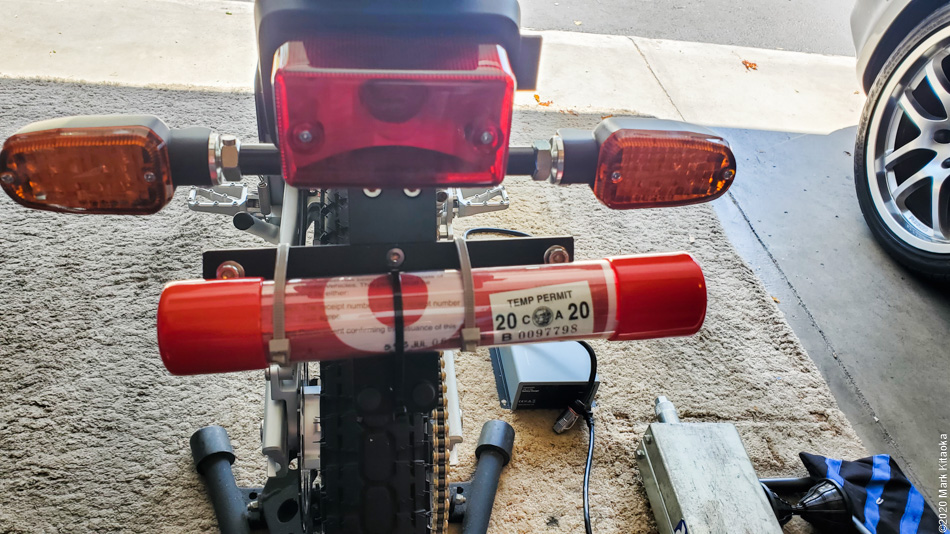 The clerk who helped me said to place my paperwork into the “Drop Slot” when I returned and park my bike in the inspection area. So upon returning with my bike that’s what I did. I had to wait for quite a while before anyone came out to inspect my bike, 40 minutes. A woman came out and asked if I was waiting for an inspection to which I replied yes. She asked where my paperwork was and I told her I placed it into the Drop Slot like I was instructed to do. She said “That box is all the way on the other side of the building, why did you do that?!”

I’m going to interject a TMI here. Both of my adult kids say “Our Dad is always only 5 seconds away from telling someone to fuck off.” Now that I’m older they have changed the metric to 10 seconds. Dealing with the DMV means that each of us is subject to the mood/personality/incompetence of the individual who ‘assists us.’ It can vary from person to person and has in every encounter I’ve had with the DMV. The level of self assured incompetence is just astounding. If the person I’m dealing with decided to screw me by denying my vehicle’s approval then I’ve just spent 15k (sales tax and registration fees) for a doorstop….get my point? A dual sport motorcycle that I could not use on the street makes no sense.

So I then walked to the other side of the building and told the very same woman I met before outside of the front door what had happened. She said I could not go into the building to get the paperwork due to COVID19. At that point she went to talk to the woman WHO TOLD ME TO PUT IT INTO THE DROP SLOT and then came back to ask my name. I told her and she went to the Drop Slot and came back and handed me the paperwork. She then instructed me to go back to the inspection area and wait for an inspector.

It was at that point things got really confusing. I was told by three different DMV employees three different things. One inspector told me that a vehicle has two VINs not just one. I had shown him where the VIN number was etched into the frame along with the label, but he then insisted that there has to be another. He asked “Is that a hybrid?” “No it’s an all electric motorcycle” was my reply. “I’ve never known a vehicle has two VINs. Are you certain?” “YES! Tesla has two VINs and they are all electric.”

He then asked for the engine number which I didn’t have with me. So I called both my girlfriend and Emily at CAKE to ask. On one of the forms I had written down the Family Engine Model number but left that form at home. Both sent me the engine number. He then said he had to physically verify that number and asked where he could find the engine number. I had no idea so I called Emily and she told me that she’d check with service to find out and call me back ASAP. I’m certain she could hear the irritation in my voice for which I am so sorry. It was not her who I was irritated with for sure!

So glad I had the tool kit mounted to my bike prior to going to the DMV since I was able to remove the motor covers and finally the rear shock cover. I could see a sticker on the motor but it didn’t wasn’t completely visible from that angle and the last two characters did NOT match the Family Engine Model Cake had supplied. The DMV employee wrote it down and then went inside to verify other information. He came out and stated that the bike may not be able to be registered in California since it was purchased from Utah and he could not find the second VIN. Emily called me back just as I had found the motor sticker and confirmed that the engine number was on that sticker.

In the end the inspector (the third) handed me some paperwork and told me to leave it in their Drop Slot. I asked if the bike passed and he simply said they would notify me in ten days. My gut gave me the same feeling as when I’d ask my mom something as a young boy and her response was “We’ll see…” At that point I began to doubt whether I would keep the bike if it could not be registered as a street vehicle in CA. And when I went to drop the paperwork into the Drop Slot of Death guess what?! There was TONS OF TRASH in the blue recycle bin since people inside must think that it was a trash can. I dropped the envelope into the slot, watched it go into the recycle AKA trash bin and walked to my bike. In ten days I will know if I sell my bike out of state (who wants a CA ‘dual sport’ bike that cannot be registered!) or receive a license plate. I’m trying to be optimistic and not tell someone to fuck off.

So when I got home that day I was going to remove the bash plate to see the entire engine number. But I did not have to do that since crawling completely under the bike made the label visible. Yet the number on my engine does not match the Family Engine Model sent to me by Cake.

I was informed that Cake has sold ‘several’ Kalk&s in California and they have not heard from anyone (except for me of course) of any issues with registration. Maybe I’m just the unlucky one. I’d certainly love to hear from other CA Kalk& owners who have obtained their CA license plate. I know that Zack was meeting with the CA DMV to get this sorted out.

But the DMV’s decision on whether they will issue me a license plate and registration remains to be seen. If not then I have wasted time, money and hope. If I do get my license plate then my total disdain for the CA DMV is justified once more.

More to follow as my DMV vehicle registration drama unfolds….