On Track Off Road – “Having the Cake” 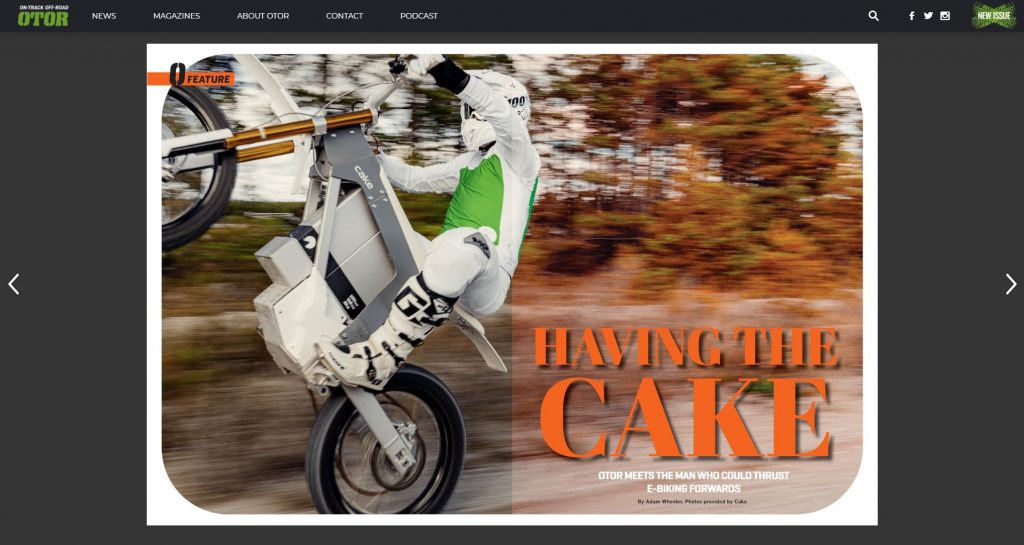 On Track Off Road published in their December 2020 online magazine “Having the Cake” (beginning on page 110) which is an interview with Stefan Ytterborn the founder of Cake. They also interview David Earle who was involved in the Kalk’s development. I enjoyed reading the article and yet I often find myself irritated with Ytterborn’s seemingly elitist attitude and thinly veiled disdain toward the ICE motorcycle community.

“I’m not a motorcycle guy.” The creator of the ski and cycling safety brand POC, fifteen years ago claims. “I’m the sort of person who will flip the finger to a Ducati passing in the street because of the disturbance. So, there is no romance here,” he adds with a handy demonstration for emphasis.

It’s not just that one statement which has led me to formulate my opinion of his attitude toward motorcyclists. There was a previous interview with Stefan and Ben where I could feel Ytterborn’s disdain for motorcyclists as he mentioned “inclusion rather than exclusion” intimating that motorcycling excludes people. I think he may be referring to those ICE riders he has encountered who are fearful of anything new or different. Yet in my own experience when people enthusiastically approach me about the Cake (or Sur Ron) in almost all cases they are former or current older ICE motorcycle riders. And it seems that he too has had the same reaction from the ICE motorcycle community:

“In the beginning I was a little too  shy to address the motorcycling market. We showed the bike for the first time at the Outdoor Retailer show in Denver and it was all about the Patagonia/North Face guys and so on….but it turns out that most of the attention was coming from the motorcycle industry.”

In my time the only exclusion in the ICE motorcycling world was toward non whites like me. Things have changed and I find that those who resist changes whether it be from steam to gasoline, or gasoline to electric tend to fear what is new and unfamiliar.

Nothing will make me happier than to have Cake become wildly successful. And here I am, a lifelong ICE motorcycle rider/racer – go figure.