I opted to purchase the Kalk& rather than the INK SL because of the Ohlins suspension. I’ve stated elsewhere on this site my affinity for Ohlins gear having used it on my RC51 track bike. But the real difference came when Dan Kyle Racing who is the largest Ohlins dealer in the world tuned my suspension. Dan was the former crew chief for Erion Racing; he knows his stuff and has forgotten more than most will ever even know about suspension. I was so fortunate that he passed along 0.5% of his knowledge onto me.

I was actually a bit disappointed when I wrote to Ohlins to ask about the ramp up chamber’s role and the 250 psi pressure they recommend for the Kalk. No range, just 250 psi. I never heard back from them. And the folks at Cake deferred me to Ohlins for information. So I asked Dan and he patiently explained to me the function of the Ramp Up chamber, its pressure and how it relates to the main chamber. After listening to him I then adjusted my forks to how I’ve been riding the bike and it feels much better than before. And when I go to an area with different conditions I’m much more educated on how to adjust for my riding style and the environment where I’m riding. I learned from Dan that suspension is as much an art as it is a science. And of course he was right.

I chuckle to myself when I hear those on a YouTube video demo ride say “Wow the forks are too soft/bottoming out/too hard/too harsh.” Why? Well because I wonder how many of those riders took the time to adjust the suspension to their weight and riding style. My money is on none. The only person I trust on YouTube videos is Tucker Neary. He tested the Kalk OR, but didn’t adjust the suspension to his riding for the first video. He states that he has the bike for a longer period and I’m sure he will adjust it to his weight/style.

I was also surprised that Ohlins neglects to place a travel gauge ring on the fork stanchion; none! So at first I just used a zip tie to measure static sag, travel, etc. But I also know that a zip tie causes stiction, no matter how slight it interferes with the function of the fork. So I simply bought some 38mm OD and 33.2mm ID silicone rings and installed it on the fork leg for ongoing fork measurement and adjustment.

I know that some people will wonder why go through all of that trouble, especially since the Cakes are marketed as ‘no need to tinker with’ bikes. I understand that and appreciate how much less there is to work on than an ICE bike, BUT….

Paying extra for Ohlins suspension including the rear shock linkage is something ‘some folks’ will just enjoy simply by owning those parts on their bike. It’s much like photographers who love owning Leica cameras – cool to hold, cool to talk about, cool to compare. My view is you can take a shitty photo with a Leica as easily as you can with a DIY homemade camera. For me paying extra for a superior tool means I want to use it as far as my skills will take me.

The magic that happens with a well suspended bike is something I understand. Thanks Dan. 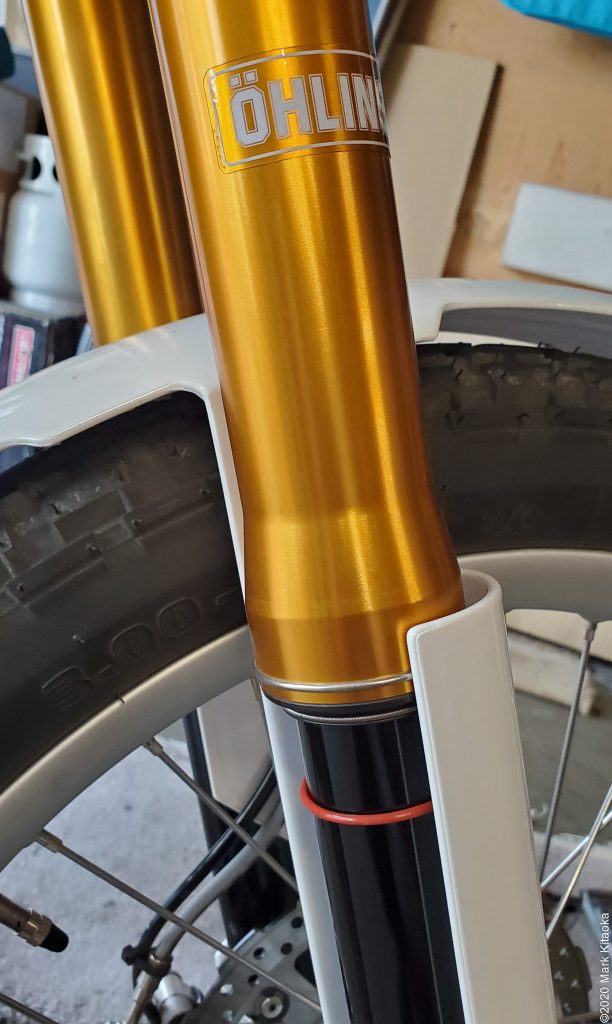